This new DIY 3D printer kit is a result of a vast market research and hours of development and engineering. It is an open source project, which means this is a versatile product that you can build upon and make it your own.
Post Reply
1 post • Page 1 of 1

I am still only printing with one nozzle, wich worked (besides of the bed leveling issue which I am still working on) pretty flawlessly. But now I have another issue.
The temperature (of the working hotend) sometimes jumps randomly. I am using the given Cura profile with the correct Cura version.
In the pictures you can see that this jump is always up, the printer detects that and stops heating (also observable by the LED on the Mainboard) which also decreases the (still too high) sensed temperature. After some time the fault seems to disappear, the printer senses the actual temperature (which is too low because the printer stopped heating) and corrects to the set temperature. It happens quite often right after heating up from a colder setting (as seen in the first picture) but also randomly when keeping a set temperature.
Here are two pictures of the temperature graph in OctoPrint: 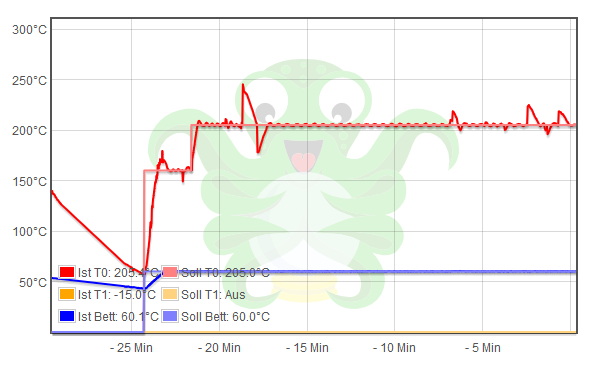 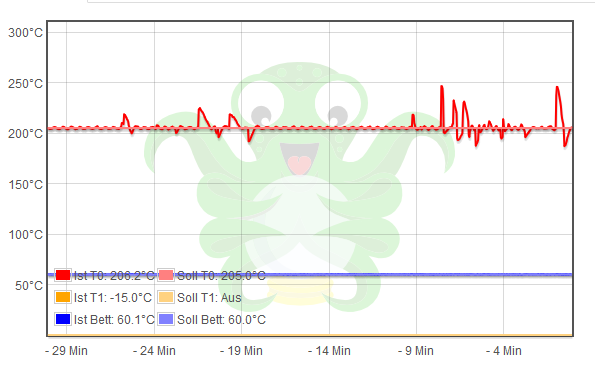 UPDATE: well, two days later now everything seems fine again. I'll watsch out if this will happen again. Maybe It was just a fault that fixed itself by turning the printer off for a longer time.